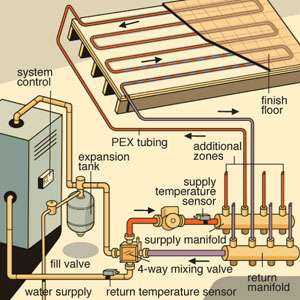 If you’ve ever asked yourself how a boiler system works, try looking at it like this: On your vehicle, the cooling system is closed. If the temperature inside the engine gets too hot and begins to boil, there is a pressurized cap that will vent the excess heat. So rather than your engine exploding, the cap releases all that pressure and the heat escapes. There’s also a thermostat in that system, which opens and closes according to your coolant’s temperature. When your vehicle is cold, that thermostat closes and re-circulates water through the engine block, allowing the engine to reach operating temperature faster. Once the engine is warm, the thermostat opens and coolant flows through the system, regulating the engine’s temperature.

Open System boiler plumbing.[/caption]Most people operating boilers choose an open system like this for safety; it’s not pressurized and vents its heat into the atmosphere, meaning that if it is over-fired, steam comes out of a pipe and dissipates into the air. An open-system boiler cannot explode if improperly installed or maintained. In fact, it’s outright illegal to troubleshoot a pressurized wood boiler in many areas if you’re not a properly licensed technician. However, properly installed, pressurized boilers are as safe as any other domestic hot water tank. The main benefit of a closed system (pressurized) boiler is that the water will not boil at 220 degrees like water normally does at sea-level. A closed system creates pressure and, as a result, you can run a boiler hotter than if it were an open system.

The drawback of an open-system boiler is that they must be constantly monitored and kept full of water, because that water is constantly evaporating off the system. If the water isn’t replaced, the boiler will eventually overheat and fail. It won’t explode, but it will cause such a racket that you might think there’s an 800 pound gorilla banging around in your boiler room. And if failure does occur, you have only minutes to save your boiler from the scrap-heap.

However, there are open-system boilers on the market today that have an automated fill system keeping the boiler full of water at all times. So if you choose an open boiler system, it’s worthwhile to make sure it’s a good one with features such as this. Also, keep in mind that there are many combination open/closed boiler systems where the boiler is an open system and the radiant heat system is closed. This is accomplished through a heat exchanger, either a fin-plate or a sidearm exchanger, where the open boiler system is its own loop and it circulates that way. BTUs are then transferred through a heat exchanger into the closed loop system.

Choosing an open or closed system is largely up to the your living situation and personal preference, but knowing the difference is the first step in deciding what is right for you.