A home made of straw bale? That’s right. Introducing the “Solar Dragon” by Living Design Systems. The Solar Dragon is an off-grid home, there are no gas or power lines running to the property, making it the perfect design for those of us who appreciate living self-sufficiently. Lead designer Paul Belanger and electrical engineer Kurt Klingbiel used several eastern influences as an inspiration (hence the name “Solar Dragon”) to create the structure: A 4,000 square foot community building insulated with straw bales located in Northern Alberta. Referred to as the “Peace Regional Eco-Centre”, it is the largest straw bale structure in Western Canada, and one of the most unique buildings we’ve had the pleasure of seeing for ourselves. 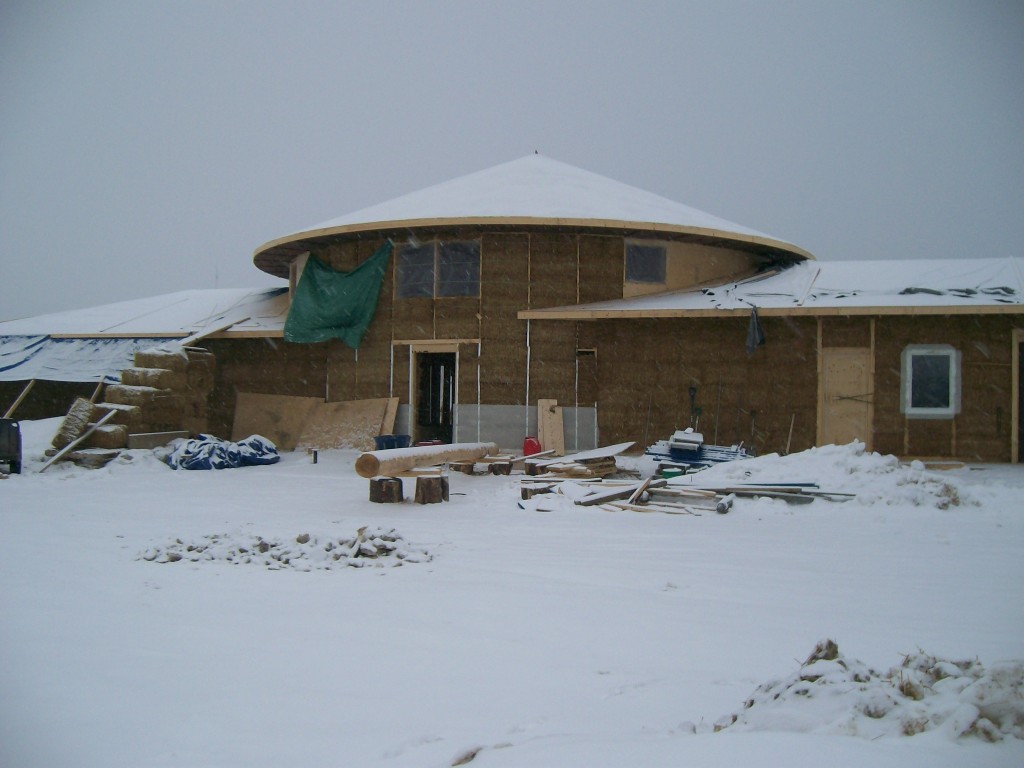 When one thinks “Canada”, however, the word “cold” comes to mind pretty quickly. How could such a large, unconventional structure stand up to the notoriously chilly weather of Alberta? Physics, and some clever design work.

First, a note about the creators: The Solar Dragon has some powerful minds behind it in the form of Alberta’s Living Design Systems. Owner Paul Belanger has over thirty years of experience with solar and energy efficient designs, and since 1998 has designed or built 34 solar and straw bale buildings. Living Design System’s has won multiple environmental awards for their designs, have built more straw bale buildings than any other company in Western Canada, and have a long history of customer satisfaction throughout Canada that continues today. For this project, Belanger teamed up with electronics engineer Kurt Klingbiel, who installed the solar electrical system in the house, and whose experience with pressure systems and copper plumbing made the crafty mechanics of the home possible. 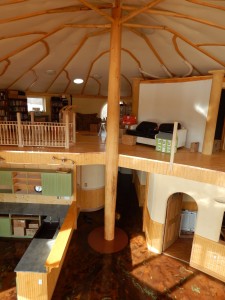 Interior of the Solar Dragon, featuring a “Tree of Life” pillar design.

Living Design’s expertise is inherent in the Solar Dragon design. By using a combination of straw bale walls, cellulose ceiling insulation, and a type 2 EPS foundation insulation, the heat load of this design is only 25% of a conventionally built house of the same size in Canada. This particular house has a large area of south-facing glazing in the central living area, making for a very significant passive solar component. Taking advantage of this passive component is a giant thermal mass designed right into the house, in the form of a concrete slab-on-grad floor.

As mentioned earlier, the Solar Dragon draws heavily from Asian aesthetics and home design. The owners of this space frequently travel to India, and Living Design Systems incorporated this preference into the basics of the home by applying sacred geometry, including a beautiful central pine support post reminiscent of the “Tree Of Life”, symbolic in many eastern religions and Christianity.

All the elegant design in the world won’t stand up to the harsh winters of the north, however, so the Solar Dragon makes use of four heat sources: Passive solar gain, biomass heaters (wood stoves), a biomass water boiler with thermal tank, and active solar thermal panels on a solar chimney. Any one of these heat sources would provide enough heat for the entire home on its own, but this set up allows for redundancy, ensuring that the home will have heat no matter what (there is also an additional backup electric hot water tank). 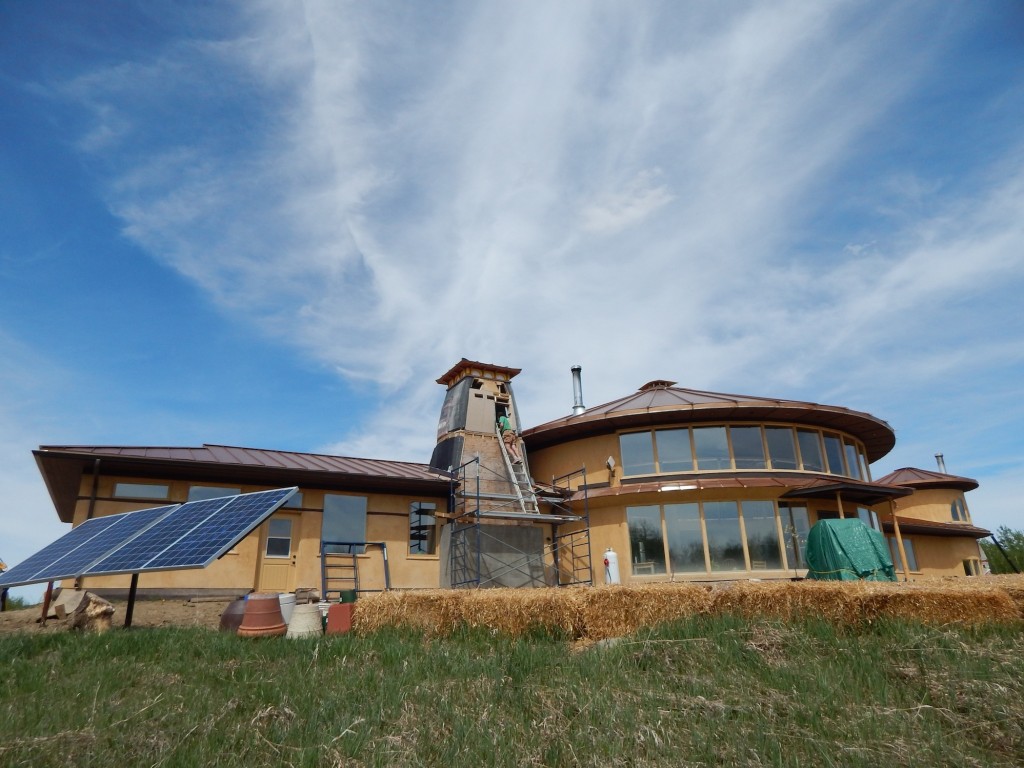 The Solar Dragon’s primary source of heat is passive solar gain, provided by the large south facing windows on the house. These windows are not covered with drapes or blinds at any time, allowing them to effectively collect heat from the sun (insolation). Even on a cold winter day, clear sunlight hitting these windows provides far more energy than all three of the biomass burners combined. Making use of the greenhouse effect, this setup traps heat in the floor of the central part of the house. 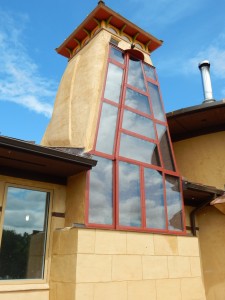 In the long daylight hours of the spring and summer, the integrated design of a solar chimney provides the vast majority of all domestic hot water needs (in rare occasions, you may need the boiler during the summer). This chimney serves several roles: Solar hot air panels are mounted to the south side, it houses the large thermal hot water tank, and is also the chase for the boiler chimney (which adds some heat to the space around the hot water tank).

But passive solar gain and a solar chimney are not always enough in a northern climate with short sunlight hours in the winter. That’s where the other three heat sources come in handy, and one of the biomass heaters takes the form of a woodstove located in the east alcove. This alcove makes exceptional use of wood heat by taking convection into account, allowing natural warm air to flow to all nearby bedrooms, whose temperature can be control simply by opening or closing a door. By designing the alcove like this and placing it in the lowest level of the house, away from any warm air sources other than the stove, the room becomes the coolest in the summer and the warmest in the winter.

Belanger also added an Esse Ironheart wood cookstove to the kitchen, one of Obadiah’s favorite cookstoves. The Esse is powerful enough to heat the central area on its own, but also provides a reliable way to cook just about anything. Its unique dogbone-style hotplate on the stove top can accommodate up to half a dozen pans at once, the oven is one of the most spacious of any cookstove available, and by using a system of indirect heat, the Ironheart ensures that your food is perfectly cooked and not dried out. It’s also one of the most efficient cookstoves out there, making it a perfect fit for an environmentally-conscious household like this one. 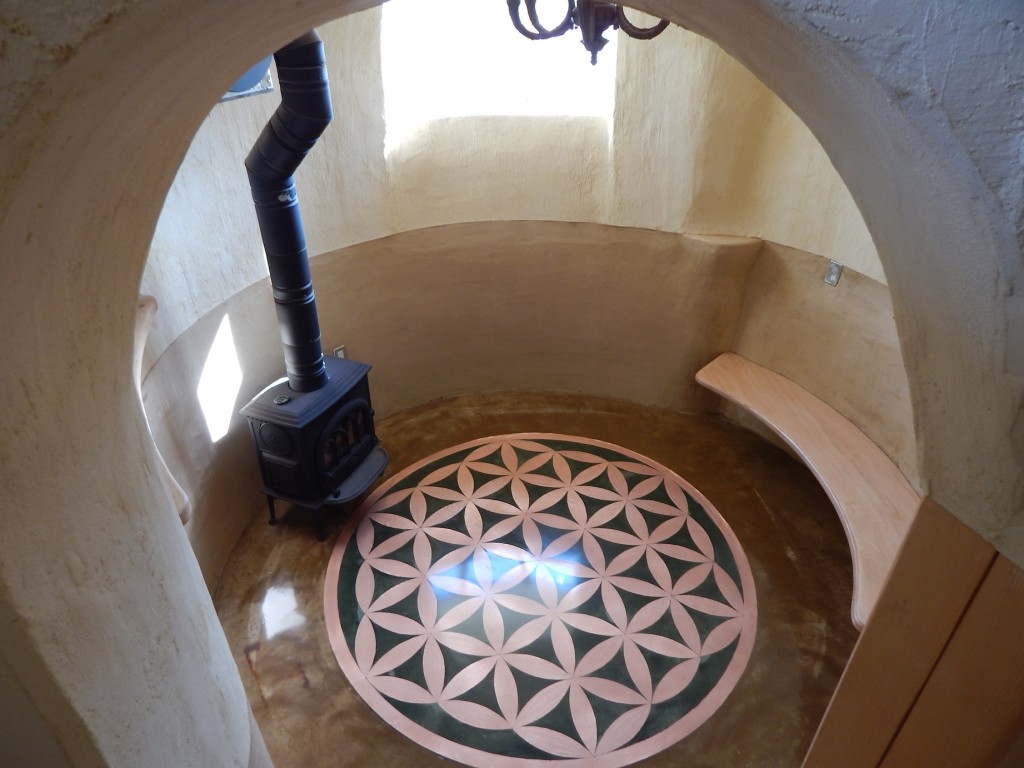 The alcove with woodstove installed. 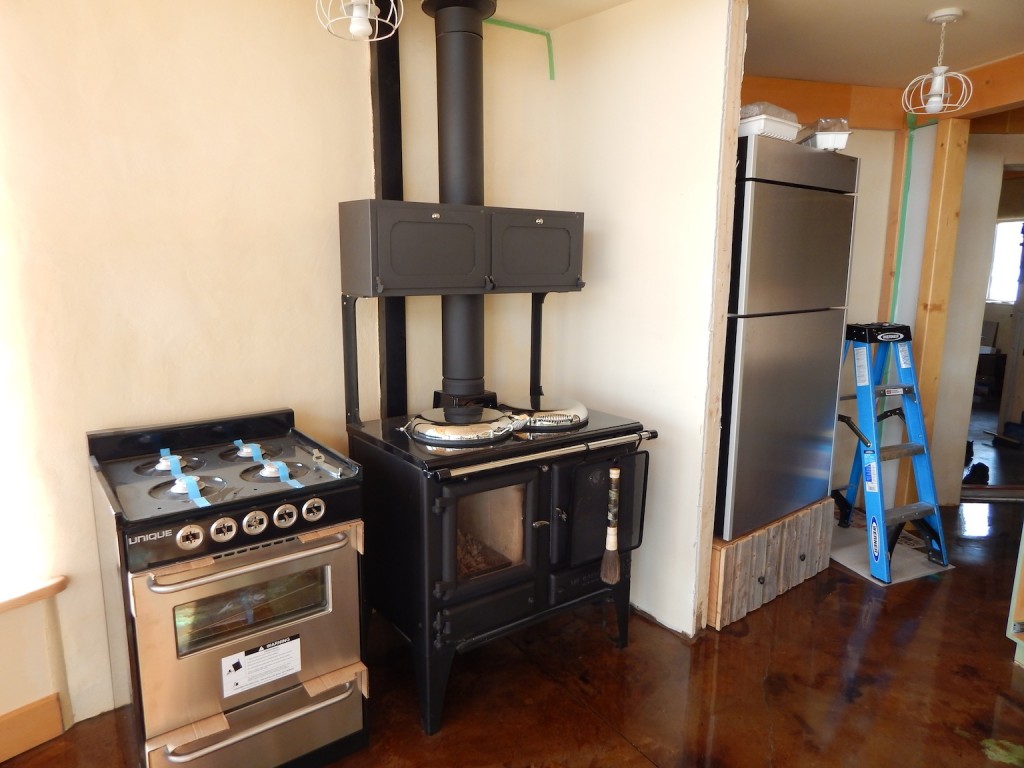 Now, the boiler. The wood boiler installed in the Solar Dragon is a Greenwood 100 (which are no longer in production; for a similar boiler, Living Design Systems and Obadiah’s recommend Glenwood). It acts as the main source of domestic hot water and home heating energy, and sends most of that energy in the form of hot water to the 400 gallon thermal water storage tank in the solar chimney, which is thoroughly insulated to prevent the loss of high water temperatures. The boiler puts out 100,000 BTUs and after a four to five hour burn, the tank’s temperature in the solar chimney rises from 100 F to 165 F. The thermal tank is not pressurized, and as a result, a hot water pressure pump takes water from the tank to a secondary tank for domestic hot water (which is also well insulated). 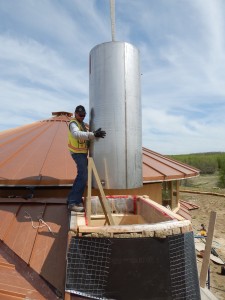 Installing the hot water tank in the solar chimney.

Not only does the boiler provide domestic hot water, but during the winter, it is one of two primary sources of heat for the in-floor heating system located in the mudroom/foyer and bathrooms. A classy bonus to be sure, and not one you expect in most self-sustained buildings.

The water tank in the solar chimney is not heated solely by the boiler, however. Installed on the south side of the of the solar chimney are solar hot air panels, which also provide heat to the water and reduce the number of boiler burns required per week. In central Alberta, where the Solar Dragon is located, these panels alone will still provide hot water two out of three days during the winter. In the spring or summer, the boiler will rarely (if ever) be needed- with the long hours of daylight, the solar panels will do all the heating work when it comes to domestic hot water.

What does all this mean for the residents of the Solar Dragon?

No heating bill. At all.

That’s certainly an enticing idea for those of us in northern climates, especially once winter rolls around. After a few months of paying for gas or electric heat, the idea of being cold starts to sound better than being broke. With the Solar Dragon, however, you’ll never have to make that trade-off; it simply requires that you provide enough firewood to feed the boiler and biomass heaters for the winter. A little bit of preparation before the snow hits means an entire winter of worry-free heating, and that sounds perfect to us.

The Solar Dragon is a shining example of self-sufficiency, an off-grid home that does not sacrifice comfort for independence. It’s also a model of alternative energy use, something that Obadiah’s has advocated for decades. Paul and his team at Living Design Systems have shown here that reliance on gas or electric is increasingly unnecessary, and that harnessing the power of solar and biomass heat is a rewarding, effective way to live naturally. 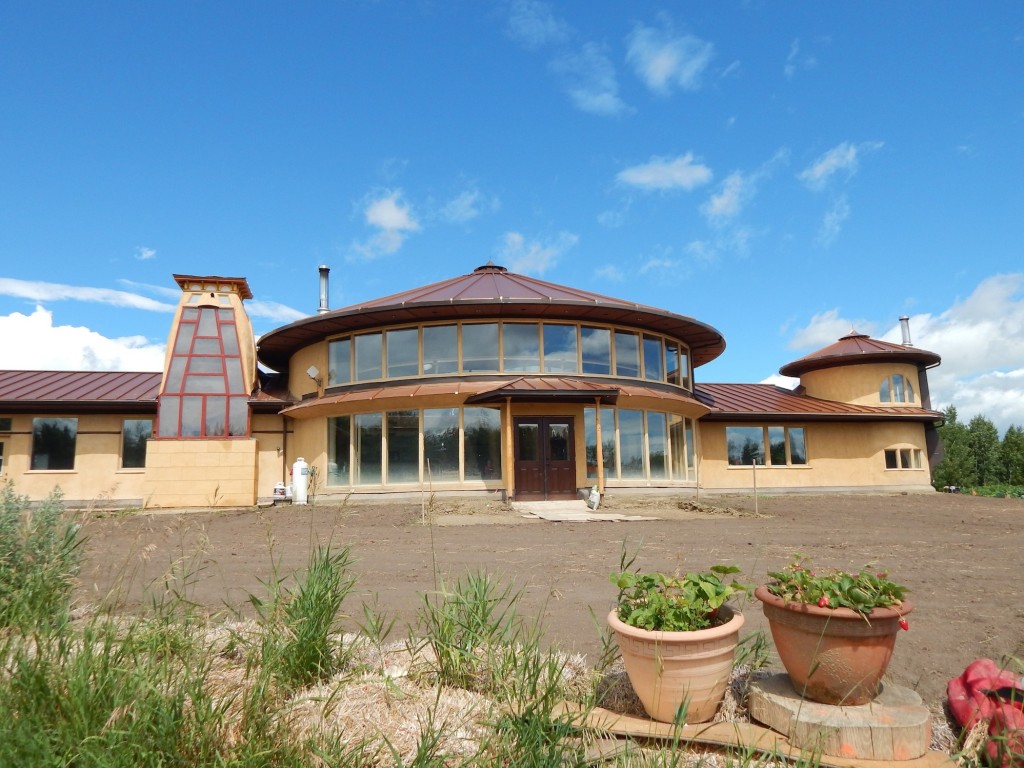 To learn more about the Solar Dragon and Living Design Systems, please check out their official website.